Last weekend, Los Angeles producer Dillon Francis brought his “Friends Rule Tour” to his hometown at the Shine Expo Hall on Saturday and Sunday night. The two-night sold out event was in support of his debut album Money Sucks, Friends Rule, which was just recently released on October 27th. Dillon Francis brought along fellow DJs, TJR and Hoodboi to drop beatz before his own closing set each night.

I attended Sunday nights show and was completely blown away. As I arrived to the Shrine, I rushed to get inside just as TJR was beginning the start of his set. As soon as the first beat dropped, the crowd went insane. TJR ‘s energy completely lit up the crowd. He dropped a ton of bangers including his own tracks “Bounce Generation” and “Ass Hypnotized.” TJR’s set was an absolute party from beginning to end and was the perfect way to jump into Dillon Francis’ set shortly after. 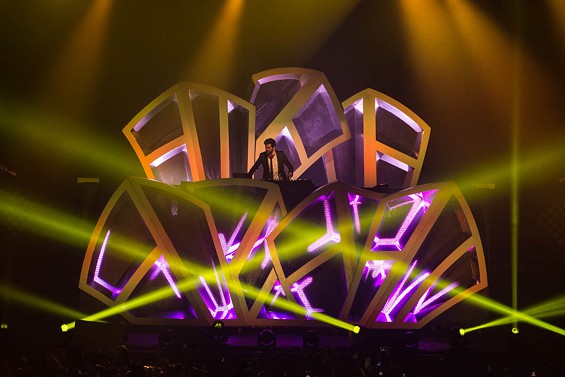 Dillon Francis brought his own stage set up, which he calls “The Gary.” You may have seen the stage earlier this year when he performed at Coachella. The stage is a like a giant piece of art with abstract shapes and colorful LED screens. The stage creates a visually stimulating show that’s unlike any other. The sold out Shrine was completely packed with excited, dancing fans all throughout Dillon’s set. He dropped a ton of new music from his debut album, as well as his fan favorite tracks “Get Low” and “Masta Blasta.” His set was also filled with special guests. Lily Elise appeared on stage to perform “Hurricane” and The Chain Gang of 1974 helped perform their song “When We Were Young” live. The energy of the night was absolutely incredible. Dillon Francis’ excitement shined through his set and there wasn’t a single person who didn’t have a great night. If you haven’t already, make sure to purchase his debut album Money Sucks, Friends Rule because it’s pretty damn awesome.